With a short season in Division Two and the large number of delayed games in the 2A-South has led to a large dispersion across the conference. Some teams playing four games, others only two could lead this conference all the way to Week Eleven to decide who gets promotion and who makes the playoffs.

Leading the conference at 4-0 the Burners are ranked first in points scored at 110 and points allowed, 12, in their conference. The Burners have played well throughout the season, including three consecutive shutout games. Brunel has the advantage of having played four of their six games already which provide’s them an extended rest period for training and adjustments leading up to the last two games of their season in Weeks Ten and Eleven. A team that has performed so well in the first half of the season with extra time to train and adjust will be a force to reckon with after the break.

The Emperors are hounding the Burners from second place in the division. at 3-1 they are one of the four teams to have played four of their games before the Christmas break. Their three wins so far have included two low scoring shutouts and a 40-0 burn in week two against the Buccaneers. However, the young team got a reality check against the Southampton Stags, avoiding the shutout, barely, as the Emperors scored a single Safety to lose 62-2. The remaining two games of UCL’s season are against the 1-3 City Sentinels and a top of the table clash against the Burners in Week Eleven. Due to the disparity in the games played the Emperors sit in an uncomfortable position not knowing the potential threats to their hopes of a playoff spot in their first season.

Undefeated so far this season the Southampton Stags have put up good numbers. However, due to postponements and weather issues, the Stags have only played two games. This sets them up for a tough four-week straight schedule in the second half of the season. Their season will likely be determined by which Stags team shows up in the latter half of the year – the one that barely scraped past the City Sentinels in Week Two, or those that steamrolled the Emperors?  If it’s the latter, we expect the Stags-Burners match up in Week Ten to be a conference crown decider!

At fourth place in the conference, the BNU Buccaneers have had a series of interesting results through the first half of the season. Starting off with a 40-0 loss to the UCL Emperors in Week Two, the Buccaneers bounced back and beat the Sentinels 20-0 in Week Three. A week off and then another shutout loss to the Burners left BNU 1-2. The second half of their season looks likely to be a similarly mixed bag, but playoffs aren’t beyond the Buccaneers if they can win out.

The City Sentinels are 1-3 at 5th in the conference. Seizing their only victory so far from the winless Spitfires, the Sentinels have been shutout twice already this year. However, they came very close to toppling the Stags in their opening game, losing out 16-14. Sitting at 1-3 doesn’t completely remove the Sentinels from the playoff race but they’ll need to win out and hope for results to fall their way elsewhere in the conference.

Looking to KCL, and The Regents are 0-2 and have the ignominious honour of being amongst the three sides at this point in the season that have taken the field, but are yet to score a single point. Coming out of the Christmas break KCL face four straight weeks of games. Were they to run the table, playoffs are still within sight, and with only one of their remaining four opponents currently sporting a winning record it’s certainly not beyond possible for the Regents if they can only find some firepower on offence. 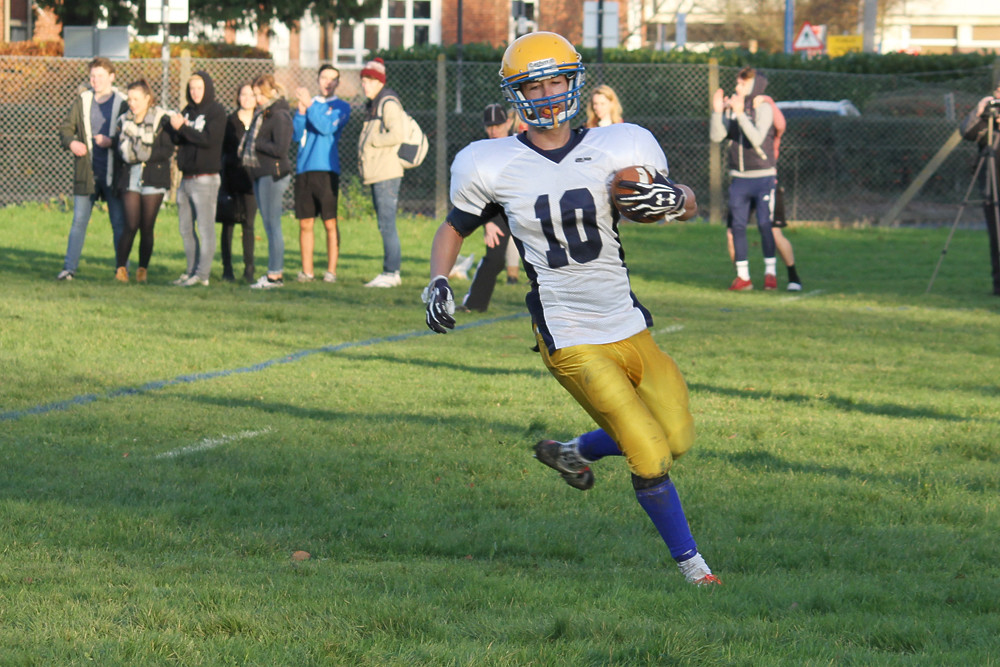 Finally, resting at the bottom of the conference, the Spitfires are 0-3 and yet to take flight. They’ve been competitive in all their fixtures, but need to find ways to put points on the board in clutch situations. Coming out of the break in Week Eight to face a Stags side they did on a number on last season might well be their last chance of kick-starting a potential playoff run if results fall their way.

In a tight conference with only six games, we may well have to see the year run its full course before we know who sits where in the Promotion and Playoff stakes.