The Leicester Falcons have announced their new venue for the 2019 season, as the Falcons ‘fly home’, and bring American Football back to the city of Leicester for the first time in years.

For 2019, the Falcons will be playing their home games at TMDP Park, home of the Leicester Lions Rugby Club.

For the 2019 UK Premier League season beginning April 14th, the Falcons will play their home games at the Lions rugby ground (TMDP Park) on Lutterworth Road in Blaby – and for the Falcons it’s a long overdue return after having to be based at the Leicester Road Football Club’s stadium in Hinckley for the last four years.

It also follows long and protracted, but ultimately frustrating and disappointing negotiations with the City Council and Leicester’s Athletics fraternity to allow other sports like American Football to be played at the Saffron Lane Stadium and give it much-needed investment as a multi-use facility.

Leicester Falcons President, Guy Kersey, explains: “We’re extremely grateful to the Lions for enabling us to come home to Leicester and play in a suitably sized and facilitated venue – and we’re excited about working with them to further develop a superb arena for sport and a long term home for the Falcons.” 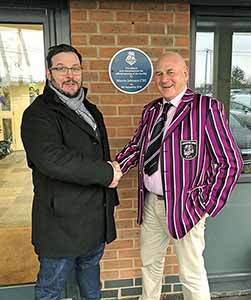 Ken Whitehead, Chairman of Leicester Lions Rugby Club (who as a semi-pro team play in the fourth tier National League 2 and are generally considered the most progressive team in the city outside of the Tigers) adds:

“It’s been a pleasure for us too and sits very well with our plans to make the club more of a multi-sport venue with sport being played here all year round and of benefit to a much wider sporting community.

“Having recently opened our new clubhouse, which is already acknowledged as one of the very best in Leicestershire and capable of hosting large events, working closely with the Falcons will also help us with our vision to create a new sporting hub for the city and the next generation of sport stars.”

“We’re glad to be able to put our Saffron Lane move debacle behind us now and plan ahead positively with the Lions, because lengthy and long-winded dealings with the Athletics clubs already based there degenerated into fear mongering tactics on their part and blatantly misleading public communications about their facilities being compromised – despite cast-iron conditional agreements in place to the absolute contrary.

“It’s been very refreshing working with the Lions committee, because they are extremely progressive and forward thinking which following the let-down on Saffron Lane is incredibly good to see. The Falcons and Lions are two very successful organisations and working together will be a big boost to both teams commercially – and we also look forward to many great and victorious match days here in Blaby!”