STALLIONS GET THEIR FIRST WIN OF THE SEASON –

Wembley Stallions travelled to Colchester and put in a dominant defensive display to win 0-24.

The Stallions started the game well, confidently passed and ran the ball downfield before being stopped midway into the Gladiators’ territory. Wembley’s defensive pressure was awarded when a high snap on fourth down ended up in the end zone giving the away side a safety putting the score at 0-2.

A mistake on kick-off gave Colchester a shorter field, but more pressure from Luke Streeter, Brett Parnham and Paul Fergusb and a sack by Duncan McAslan prevented the home side from moving the ball far. The Gladiators’ drive then ended with an interception by Basil Gazali.

Wembley ran the ball well with Geraldas Kastauna and moved into the red zone before being stopped again. The Stallions’ offence weren’t long off the field as the home side suffered a quick three-and-out as time expired in the first quarter. 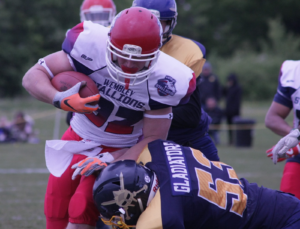 A combination of runs from Kastauna and passes to Granit Uka quickly gave the Stallions another scoring opportunity. However, they were stopped three-yards short when they went for it on fourth down.

The Gladiators had a hard task playing out of the end zone and more defensive line pressure lead to a three-and-out. A short punt from the two-yard line gave Sam Fraser a chance to show his speed, spinning out of a tackle to run in a touchdown from the 40. Going for two on the extras fell short putting the score at 0-8.

The home side were stopped quickly again but were given another short field after recovering a fumble. However, sacks from Streeter and Fergus quickly put the ball back in Wembley’s hands. The Stallions continued to run the ball with Kastauna but were stopped short of the red zone as time expired on the first half.

Colchester started the third quarter well, moving the ball into Stallions’ territory. However, more pressure from Parnham and Streeter and a sack from Kane Alexander ended the drive. The Gladiators recovered another fumble, this time within the red zone. A sack from Chris Middlemas and pressure from Parnham stopped the drive at the seven-yard line…