Making the second of our three trips to England this season we were looking to restore balance to our record, return to .500, and start a long run of fixtures which will define our 2019 season with a positive result. 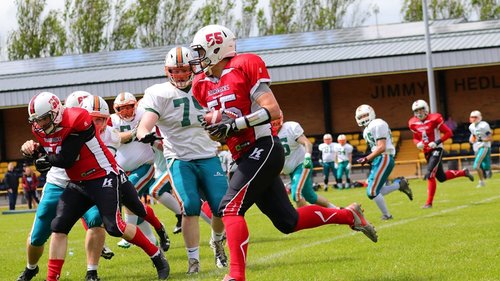 With Gateshead looking to bounce back from a heavy defeat to the hands of the Northumberland Vikings last weekend, the Senators would opt to forego punting the ball on their opening offensive drive, a decision the Roughnecks defence would make them regret immediately. Linebacker #55 Phil McCall would intercept the pass from the Senators QB at the half-way line before taking off behind a wave of Red blockers, to find the endzone – a first for the defence since the 2017 season. Immediately back on the field following the PAT and kick-off the defence would again force a turnover, this time Lineman #69 Matt McCall would come up with a fumble recovery and, despite an unsuccessful lateral pass during the return (which his brother Phil would recover for him), set the offence up deep in Senators’ territory.

And it wasn’t long until the offence added 6 points of their own. Quarterback #16 Chris Breen deciding his best course of action was to tuck the ball under his arm and carry it in himself. Another successful PAT later it was 14 – 0 to the Roughnecks and the match looked to be over as a contest. Although at only two scores down, no-one’s ever really gone and the Senators would begin to gain a foothold in the game, stiffening on defence and reducing their mistakes on offence meaning that the first quarter and then first half would finish at 14 – 0. 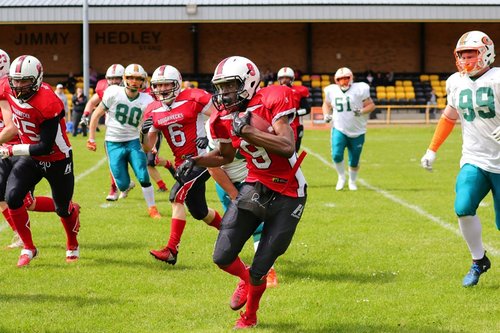 Challenged to step-up in the second period the Roughnecks offence would kick into gear finding success in moving the ball throughout the second half, but failing to add to the cushion. A change in Quarterback from the Senators would also provide a spark to the home side, as they began to grow in confidence, and only a redzone fumble recovery by Lineman #90 Ross Elrick (forced by fellow Lineman #67 Che Mueller) would stop them from reducing the deficit.

Continuing to move the ball, both through the air and on the ground the offence would find pay-dirt again, this time with WR #6 Lewis Hughes carrying the ball into the endzone behind the left-tackle to finish off an impressive drive and make the score 20 – 0. The Senators offence however would again come out fighting, and made strong process down the field to score points of their own – running the ball in on third down preventing what was nearly another strong defensive stand in the shadow of our own goal posts. Phil McCall would burst through the Senators offensive line to give the selected run play no chance on the 2 point after try making the game a 14 point affair once more. 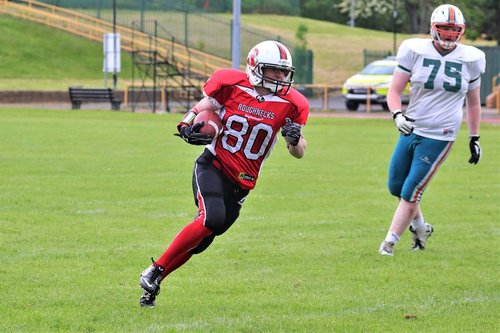 The remainder of the game would be marred in controversy with back to back plays leading to back to back injuries to Roughnecks running backs and neither drawing a penalty. As the second injury stoppage would require an ambulance, and with concerns to the head and neck area of Running Back #80 JP Broughton there followed a lengthy delay to fourth period, one which would galvanise the Roughnecks and see any hint of a Senators comeback truly quashed. Despite some worrying scenes on Sunday, JP was discharged from hospital later on that evening to return to Aberdeen with scans revealing there had been no bones broken in the neck. 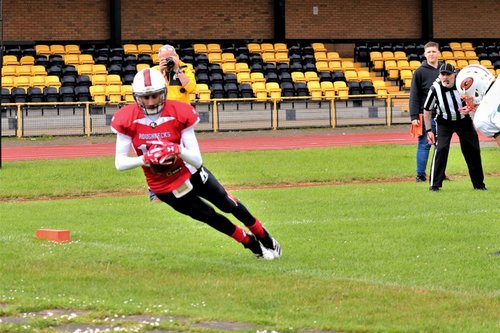 Following the restart the Roughnecks would finish with a flourish. On offence Quarterback Chris Breen would throw the ball Wide Receiver #18 Rhys Elmslie’s way, and with a beautiful toe-drag catch Rhys would haul in the catch just inside the back line of the endzone, 26 – 6. Deciding to punish the Senators for turning down the opportunity to kneel out the game amidst the injury concern to JP, the offence would successfully add on the 2PAT making the lead 22 points. But not to let the offence have all of the fun, and not to let his elder brother get all of the praise, Defensive Lineman #69 Matt McCall would catch the ball in amongst a botched QB/RB hand-off by Gateshead and find the endzone for 6 points of his own. Again opting to go for 2 points, Running Back #21 Sean McDonald would repeat his success of 4 plays earlier added his 3rd and 4th points of the afternoon to finish the scoring.

Read about the Roughnecks’ MVPs at abdnroughnecks.com