Wembley Stallions beat Ouse Valley Eagles 44-14 in their first home game of the season on Sunday. Nick Glenday scored 14 points and is now the Stallions’ highest points scorer. Whilst Sam Fraser holds the most touchdowns scored after he ran in another punt return to bring his tally up to three.

The Eagles started the game and ran the ball downfield and into the red zone, but a fumble on third down recovered by Brett Parnham ended their drive. The Stallions also ran the ball effectively with Geraldas Kastauna and Emmanuel Olagbaju and a pass to Glenday put the home side into the red zone, but the drive stalled. The field goal unit was sent on and Glenday slotted over from 29 yards to put the Stallions ahead at 3-0.

Ouse Valley struck with the run game, but the drive stalled midway into the Stallions’ territory as time expired on the first quarter. The home side mixed their attack with runs from Olagbaju and catches from Granit Uka as they moved from inside their own ten-yard line to the 35 of Ouse Valley. A catch and run by Glenday ended the drive with a touchdown, Glenday added the extras to increase the Stallions’ lead to 10-0.

Both sides suffered three-and-outs on the next drives but a large gain by Fraser on the punt return gave Wembley another scoring opportunity. Olagbaju was handed the ball and ran in for a touchdown, Glenday added the extras to put the score at 17-0 as play ended on the second quarter. 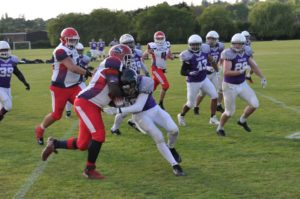 The Stallions started with the ball in the third and made quick work of moving downfield with catches from Glenday and Uka and a run from Olagbaju to put them in the red zone again. A pass to Uka in the back of the end zone gave Wembley their third touchdown of the day. Glenday added the extras to increase the score to 24-0.

The Eagles continued to run the ball, but the Stallions’ defence held firm with tackles from Luke Johnson, Chris Middlemas and Luke Streeter, forcing another three-and-out. The resulting punt landing into Fraser’s hands who weaved his way from his own 26-yard line into the end zone to score his third touchdown of the season. Glenday added the extras to put the score at 31-0. 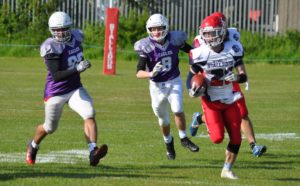 Ouse Valley struck with the run game and this time broke free, scoring a touchdown with extras to put the score at 31-7. The Stallions continued to mix up plays with runs from Carl James and catches to Uka put an interception turned the ball over. A well-timed blitz from Duncan McAslan stripped the ball on the time play to put Wembley’s offence back on the field.

More runs from Olagbaju, Ben Lyons and Clark Gardener put the Stallions back in the red zone. The ball was handed to Daven Abrahams who ran in for his first ever Stallions’ touchdown. A fumble on the snap meant the kick couldn’t be attempted putting the score at 37-7.