STALLIONS EARN THEIR FIRST BACK-TO-BACK WINS OF THE SEASON

A dominant display on both sides of the ball led the Wembley Stallions to a three-score lead at half time and with a solid defence, they never looked like losing, as they beat the Colchester Gladiators 32-6.

The Stallions chose to kick-off in the 1st and 2nd half to ensure wind advantage at the end of the game. This gave the home side’s defence an early chance to stretch their legs, as sacks from Luke Streeter, Martin Dwamena, Paul Fergus and Andis Mema kept the Gladiators at minimal gains. The Stallions’ offence suffered a quick three-and-out, but were not off the field for long after another sack from Streeter and Dwamena prevented the away side from getting any momentum.

Wembley started moving the ball with runs from Geraldas Kastauna and Carl James and a catch by Granit Uka quickly put the Stallions inside the red zone. A penalty on the next play wiped away a touchdown, but the home side were not deterred as Junior Price passed the ball to Nick Glenday in the end zone for his fourth touchdown catch of the season. A low snap meant the kick couldn’t get away on the extras, putting the score at 6-0 as time expired on the 1st quarter.

The Gladiators were kept to a quick three-and-out and another sack this time from Joe Bines and Chris Middlemas. The pressure upfront took its toll as a high snap stopped the punt from being completed, giving the Stallions excellent field position inside the 10-yard line. Kastauna found the end zone with a rushing touchdown. The extras were added by Glenday to put the score at 13-0.

An unsportsmanlike penalty gave Colchester their first venture into Stallions’ territory however, the drive quickly stalled with tackles from Dwamena, Middlemas and Brett Parnham. Whilst Wembley moved the ball with ease with more runs from Kastauna and James to put the home side back inside the red zone. A back pass to Kastauna and good blocking on the line led to another touchdown, another low snap prevented the extras, putting the score at 19-0.

Colchester couldn’t gain any momentum to get a foothold in the game, even after a fumble from a punt gave the Gladiators procession at the Stallions’ four-yard line. Pressure from Streeter and tackles from Duncan McAslan and Pietro Pastorelli, followed by Glenn Trafford-Smith blocking a pass prevented the away side from taking advantage as time expired on the 2ndquarter.

Read how the second half panned out for these two SFC 1 East teams over at wembleystallions.co.uk 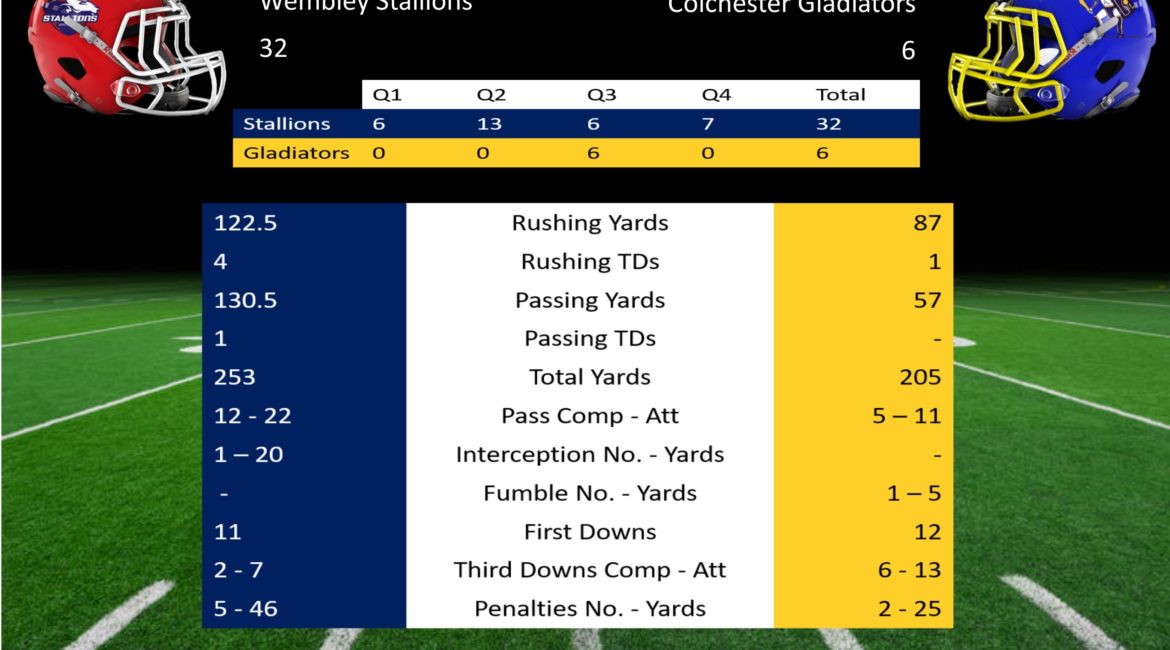