While we lost two games to the awful weather, there was still more than enough Britball to go around in Division Two:

Huddersfield Hawks - Hawks may have won their Bird-Off versus the Falcons, but it looks like our pollsters were looking for something more convincing than the 12-8 scoreline we saw. They slip just outside the top ten on this occasion.

Liverpool Raptors - The Raptors take a tumble from fourth, all the way out of the rankings as they were soundly bested by the Leeds Gryphons in our Week Two Game of the Week.

The York Centurions remain right on the cusp of a Power Rankings berth. With luck they’ll get a game against local rivals, the YSJ Jaguars, in Week Four. A convincing scoreline should see the Centurions claw their way in the rankings.

And, opening their campaign with a nail-biting win over the MudDogs, the Edge Hill Vikings are actually in the Rankings conversation at this early point in the season.  Frustratingly their Week Four fixture versus the Bombers has been pushed back, so we won’t see them again until Week Five and by then they’ll have to make quite a bit of noise to get back in the race! 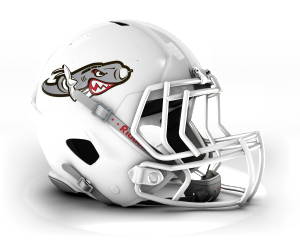 Bombers slide a couple of spots following their bye week.

They’ll host the Leeds Gryphons this weekend - the victor of that one could emerge as the team to beat in the 2A North. Do not adjust your television sets! The Worcester Royals are indeed a Power Ranked outfit!

They bested the Lancers in a back and forth Week Two shootout, and it looks like life in the South West conference could yet suit the Royals well!

Week Three sees them head to a Bath Spa Bulldogs side that lost heavily on Sunday so don’t be surprised to see the Royals climbing closer to the D2 throne this time next week!

A nice win over the Pythons allowed the Blades to show their steel and prove they deserve a rankings spot.

They head to a bye, before facing the UEL Phoenix in Week Four - expected to be their biggest rivals for promotion out of the 2A South East this season.

7. Bristol Barracuda (Down one) One week off, one spot down the rankings for the ‘Cuda.

They host the Oxford Lancers this Sunday and will most likely have a score to settle after the Lancers skewered the Bristol outfit 28-0 last year!

A win will go a long way to showing the Barracuda are among the big fish in the 2A South West pond.

6. Royal Holloway Bears (Down One)

Our pollsters are a fickle lot, and with their game versus City called off due to the ‘chilly monsoon’ across the South, the Bears drop a spot.

They’re scheduled to head to the BNU Buccaneers this weekend, but with the Bucs struggling for numbers we wouldn’t be surprised to see this fixture pushed back.

A quiet weekend for the Regents sees them take a steep tumble down the rankings. Still, they’ll have a chance to bounce back up again on Sunday when they host the Sussex Saxons.

The scoreline from this one should give us a more clear idea of who the teams to look out for in the 2A South are.

A top five debut for the newly-dubbed ‘Wolverines’ as they set fire to the scoreboard with a 10-49 win over the UWS Pyros.

The schedule has them taking on the YSJ Jaguars this Sunday - hopefully the Jags have resolved their equipment issues in time?

In truth, we’ll probably need to wait until Week Five against the Predators to really know what kinda Wolverines outfit we’re looking at here.

it says a lot about the confidence some of our pollsters have in the Predators programme that the team remain locked in the #3 spot, despite being yet to kick off their campaign!

They’ll take a trip south of the wall to square off against the Sunderland Spartans this Sunday. The first matchup of the year for both teams, it’s worth remembering the Spartans were playing D1 football last season and though there’s been little chatter surrounding them in the preseason, they could yet emerge as a top contender in this conference. The Panthers win big over the Bulldogs, but it wasn’t enough to keep the top spot somehow!

They’ll head to a bye week, before facing the Barracuda in Week Four.

And with a confident win in our Game of the Week fixture, the Leeds Gryphons find themselves sitting pretty in the top spot!

They’ll take a trip to the similarly 1-0 Bombers this weekend, and the way this match up goes will teach us a lot about the shape of things in this competitive looking conference!