Following another successful BAFCA convention last week, the BAFA National Leagues returns to action with a large number of games in Week Seven. All games will hold a minutes silence prior to kick-off in memory of Charles Mack of the Cambridgeshire Cats and CEO of Britballerz.

East Kilbride will welcome the Manchester Titans for the first time since 2011 this weekend as they set out to lift themselves from the bottom of the Prem North.

When they last met EKP walked away as 100-0 victors according to the history books, however, they’re very much aware that this will be an entirely different affair.

More notably, this will be the Pirates first game under new HC Jamie McLaughlin after Ross Templeton stepped away from the team, following a disappointing start to the season.

EKP will be fresh coming off a bye-week, “like any bye week it’s another chance to work on things that haven’t gone well and get guys healthy for the coming games,” said McLaughlin.

The shake-up in management comes at a crucial time for EKP as they will face a strong, and currently hot Titans side that have exploded onto the scene in the Prem North. McLaughlin hopes to bring “a fresh pair of eyes into the situation and a chance to bring in some new ideas,” he said.

“We’re obviously in a position where we have to turn things around in a big way,” the Pirates HC said, “It’s different to challenges of the past, but hopefully not beyond us quite yet.”

Manchester come into the game following a gritty 16-14 win over the Edinburgh Wolves. The bye has come at an ample time for the Titans, as they had previously played three games on the bounce.

“The bye week for us was all about learning to recoup regathering ourselves after three hard games in a row,” said HC Pete Birds, “It’s been a tough start to our life in the Premiership and one that we have challenged ourselves against very good teams and learned a lot about ourselves.”

Birds credits the Wolves performance to a monumental team effort, away games in Scotland are notably difficult, as with any, and the team came together to close out the game against a tough Wolves opposition.

“We stayed Positive when we could have succumbed to the pressure and managed to get over the line with the special teams managing to get us over the line and make key plays at key times within the games to get us the W,” Birds said.

“EKP have had a couple of changes in the coaching line up and we expect them to come revitalized and ready to play ourselves,” the Titans HC said, “We have prepared for them like we prepare for every game and feel ready for the challenge and an opportunity that lies ahead. We look forward to a difficult game and hopefully, our preparation and the ability within the team will stand us in good stead against a good programme.”

Sheffield will be hoping that they can continue their form against a Nighthawks side that has come undone so far, albeit they have only played two games with one being against the National Champions.

The extended break has given Sheffield some well needed time off, “after 4 games on the bounce the bye weeks have been important to rest and recuperate but to also make the required adjustments in preparation for the visit of the Nighthawks,” said HC Toby Chesters.

Chesters will continue to look to QB Brad Thompson to make connections with his receivers for big plays. Josh Allen has also returned from concussion protocol, a key contributor for the Giants. “Big shout-out to the whole defence though,” said the Giants HC, “I asked for another shutout and that’s what they gave me.”

“Our games against Merseyside last season were good, close contests. I am sure we will see the same this season. We look forward to welcoming them to Sheffield on Sunday where we will be aiming to reverse last year’s two close defeats,” he said.

Merseyside will be deflated at their 0-2 start as they continue to strive to at least match their second-place finish last year.

After suffering a 63-13 scolding by the Phoenix in week six the Nighthawks have used the bye-week to rest. “The team were given some time off to recharge and refresh following the two opening fixtures, but we still held sessions to ensure the skill guys were sharp heading into game three,” the organisation said.

Granted, they were on the back-end of a crushing defeat, but Merseyside still had standout performances across the team. RB Martin Murphy had 82 yards and a touchdown on 15 carries, averaging 4.5 ypc. “He was phenomenal, really ground out the hard yards for us, which is testament to his hard work since his switch from Halton,” they said. Jonny Weekes had a standout performance at corner with 5 total tackles, 1 deflected pass and an interception with a 45-yard return. Safety Yemi Adenola flew under the radar, but after an impressive performance finished with 11 solo tackles.

“The focus for this week remains the same; it’s all about us and what we’re doing,” the organisation said, “We can only control what we do and despite being 0-2, we’re taking the necessary time to prepare as always for this weekend and are looking forward to the opportunity to improve on that this Sunday.” The Wolves will be licking their wounds following a bitter 16-14 loss to the Titans, with the bye-week allowing the extra time necessary to prepare their toughest opponent so far this season, the Tamworth Phoenix.

“The team used the bye week to rest up and get healthy. We have prepared as we always do with midweeks and film study of our opponents, there’s been some different film to use because of Tamworth’s run in Europe,” the Wolves said.

The defence collectively deserves to have their praises sung, “they played out of their boots!” They forced a fumble late into the fourth quarter, giving the offence an opportunity to win, unfortunately, they could not convert.

“This week is of course going to be one of, if not THE toughest challenge of the season. We played Tamworth close at home last season but were handily beaten on the away leg. We are always up for a challenge and will be looking for the huge upset,” the organisation said.

Tamworth are hot following their blistering 63-13 win over the Nighthawks and while European wins may have proved elusive so far, they clearly have a solid grasp of the domestic game.

The offence will once again call on QB Pat Daley, supported by ridiculous depth in both the backfield and receiver core to put numerous points on the board.

It’s clear that the Phoenix have scores to settle, this could well turn into a blow-out as they continue to work towards their second title, exuding excellence.

Let’s not forget that in week six of 2017 the Wolves narrowly lost 27-20 to the Phoenix, which has been their closest game to date. While a loss for Tamworth is unlikely, it’s not outside the realms of possibility as Edinburgh have proved they can put up points through QB Jamie Morrison and RB Calum Davidson. 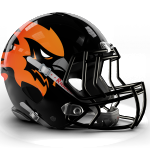 This weekend they play their second game against the Knights. The score from the first game was 66-12 to the Blitz and with the home crowd behind them this time I imagine the Blitz will do even better and could put up more points.

The Knights have only managed a win in their first game of the season this year which was against Bury, the team that unfortunately had to cancel their game last week due to lack of players. So far they’ve faced up against two strong London teams yet have managed to score points on both with their last game against the Olympians only a 10 point score difference. This weekend they travel to the Blitz, if they can cause an upset and get the win they will open the table back up to allow some movement from both the Knights and potentially the Aztecs. 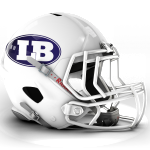 I think the Blitz will continue their streak and win.

Another (walkover) win in the bag for the Warriors means it is looking like they are set to be the leading team for the majority of the season. Their last game would have been a shutout had it not been for the Olympians last-minute touchdown where time expired during the play meaning they didn’t get the opportunity to kick the XP. All round great work from the Warriors means they head into this game 2-0 and will be thinking that their only competition again this year will be the Blitz. The teams don’t meet each other until Week 10 so time will tell who will likely come out on top. This weekend they host the Saints in a game which could be heavily one-sided.

The Saints haven’t had the best start to their 2018 season, with two shutout defeats and a loss against Farnham they head to the Warriors knowing this will be one of their more difficult games. The Saints haven’t giving up however, Head Coach Nowlin said the team has played 3 really good teams but have felt they’ve had too many self-inflicted errors.

He said ‘I’m proud of all the players who have played with us. It’s no secret our numbers are the lowest of any team but the effort we have given has been outstanding and the attitudes pre and post-game have been great. Players that have stood out have been Dante Decker, who leads the team in receptions and Jonathon Howser who has been the most productive three-way player for us. I also have to mention Aaron Wheatley, Chase Martin and Troy Cockerill, they are the only three players left from the championship teams and they have taken on the role as leaders and mentors for our new players. We owe them a debt of gratitude for their play and leadership.’ The Saints know that this weekend they will have to play their best game of the year, Coach said ‘We know we have our hands full. The Warriors are one of the best teams in Europe, they are well coached with a big roster.’