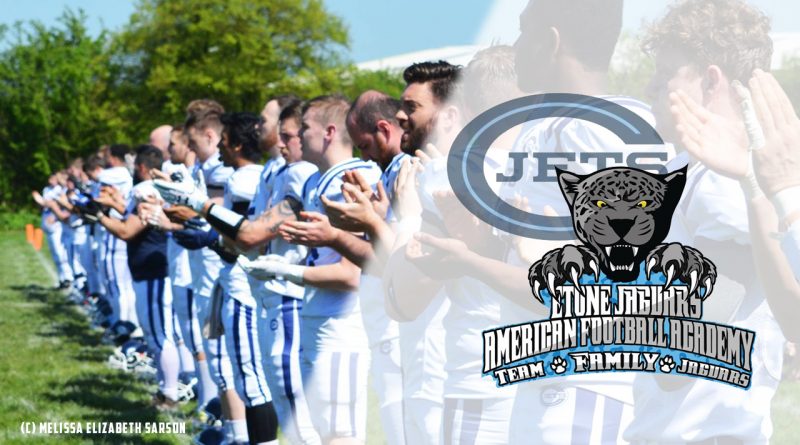 In a decision made at a club meeting last week, and made public this evening, the Coventry Jets American Football Programme has announced it will cease operations at the end of the 2018 football season and transfer all assets to the Etone Jaguars American Football Academy.

The tough choice was made after the club has struggled to live up to expectations in recent seasons, especially considering the storied history of the programme that includes a National Championship in 2008, as well as success on the international stage.

Per a joint statement with the Jaguars, released on the Coventry Jets Facebook page, the team emphasised how difficult the decision was to make, but ultimately it was made in the best interests of the sport’s future in the city.

The merger with the Jaguars looks to pump some new life into the programme, the Jags having gone from strength to strength since entering the league only a couple of years ago. They’ve worked hard to build strong links with sponsors and found success on the field this season - their U17 team completing an undefeated campaign in the hotly contested Central Conference, before going on to finish fourth nationally. With rumblings of a Etone U19 team incoming, the combination of the Jaguars and a rebuilding and hopefully revitalised senior team will hopefully provide both merging organisations with great benefits going forwards

The Jets will compete for the last time this coming weekend against the Doncaster Mustangs - hoping to round out their year on a high and inviting former players and fans along to see off the Jets moniker in style.

It is with great sadness that following the conclusion of the 2018 season we will cease operating as the Coventry Jets and will be transferring the club and all assets to the Etone Jaguars American Football Academy. The team will be re-locating and rebranding as the Jaguars Senior programme competing in BAFA’s NFC Division 2 in 2019.

The Jets have been on a steady decline for the last couple of years and will embrace the fresh start the Etone bid brings to the table. It was a hard decision but one that was ultimately left to our members after several weeks of discussion.

The Jets will forever be in the History books as a team that exceeded expectations. Under the guidance of the late Gerry McManus competing in Europe and going to 6 consecutive Britbowls from 2005-2010. Winning a National Championship in 2008, Britbowl XXII will go down as arguably one of the best finals of all time.

The club would like to thank all the supporters, volunteers, staff and players that have been apart of the Jets family over the last 14 years of which we hope you will continue to show your support as a new era begins under the Jaguars banner.

Special thanks must go out to the late Gerry McManus, Paul Rickuss, Sean Martin & current Head Coach Sam Kendall for all their efforts and time that kept the Jets going for all those years.

The Jets will compete for the last time this coming weekend with our final home fixture Vs Doncaster Mustangs and will be hoping after a troubled season to go out on high. We would love to see as many former players, coaches and anyone that has been involved with the club down to cheer us on in our finale.

Etone Jaguars Founder and Chairman Lawrence Grugeon commented “It was always my intention to grow the Jaguars football programme and be able to offer all tiers of football by 2022, this just accelerates things. With the emergence of our U12 Flag team this year along side a very successful second season for the U17’s finishing a respectable 4th in the country, I saw an opportunity to help a club that I was a founder member of in 2004. The Jets have been on a steady decline for several years now which is a shame for the once Britball powerhouse. I believe with a fresh set of eyes managing the programme and backed by a great Academy set-up adding to a talented but underachieving squad the new Etone Jaguars Senior team can have a bounce back year in 2019.”

The Etone Jaguars are also happy to announce their intentions to add an U19 team and an all Women’s kitted team for competition in 2019.
For more information on how to join the Etone Jaguars American Football Academy programmes please email: [email protected]