Week four mostly saw the strong get stronger, but with a number of previously undefeated outfits taking their first losses of the season, how has this impacted this week’s rankings?

OBU Panthers - They’ve floated near the top of the rankings since day dot, but our pollsters are an unforgiving lot and the Panthers’ loss to the Barracuda see them crash right out of the top ten! They travel to Bournemouth this weekend, but the Bobcats are coming in hot after a fast start to their campaign with a comfortable win over the Lancers.

The Staffordshire Stallions struggled in their opener versus MMU, but had no such issues when they took on their Hawks in our D2 Game of the Week last week. Dominant in every phase of the game, the Stallions narrowly miss out on a rankings spot - our pollsters likely looking for a second notch in the W column before trusting them with a top-ten berth. They’ll get that chance when they host Keele this Sunday.

Meanwhile, the MMU Eagles have moved to 2-0 with back-to-back wins, but slim margins of victory are likely seeing them miss out on a rankings spot. They host the Colonials this weekend, and surely if they move to 3-0 our pollsters will no longer be able to snub them?

The Colonials just about cling onto their rankings spot following a week off, but will need to follow up their impressive opener against the Legion with a similarly strong showing as they take on the undefeated MMU Eagles this Sunday.

9. Royal Holloway Bears (Down One)

Lack of action sees the Bears continue to slip, spot-by-spot, down the rankings.

We’ve not seen them since Week One, but a top-of-the-table clash against KCL beckons this weekend, with the Regents knowing they can’t afford another defeat after they came up short against the Saxons.

A win should see the Bears climb back up the rankings.

The Raptors take a short trip across to Edge Hill this Sunday, eager to follow up on their dominant win over the MudDogs in week Three. Given that the Vikings barely edged past Bangor themselves, Liverpool are surely coming into this game hot favourites to take away a big win, and potentially claw their way up a few rankings spots? 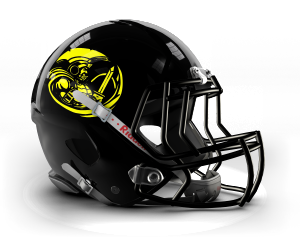 After weeks of teasing, the Centurions finally make their Power Rankings debut in the #7 spot!

Consistency seems to be their calling card, posting up 18 points in three straight outings and heading to the midseason break undefeated.

They’ll emerge in the New Year to take on Edinburgh in what could be shaping up as a decisive showdown.

A week off sees Heriot Watt drop outside the top five.

Still, they have the perfect opportunity to reclaim a top rankings spot this Sunday when they host current conference favourites, the Edinburgh Predators!

A win would position the Wolverines as the top scots in the tier and allow them to head to the Christmas break perfect at 3-0.

The Blades looked particularly sharp last weekend as they made short work of the UEL Phoenix - the 42-0 win establishing Essex as the team to beat in the 2A South East.

They take on the ARU Rhinos this weekend, who were squeezed 0-35 by the Pythons in Week Four - can the Blades put up their first Burger?

No game, no change for Edinburgh. The Pyros couldn’t field a team to face the Predators, moving the Scots capital side to 2-0.

They take on Heriot-Watt this weekend, with the title of top scots in the tier on the line! ‘Cuda climb three spots thanks to their most convincing victory of the season so far, and against a previously undefeated Panthers no less!

They share the top of the table with a similarly 3-0 Worcester Royals, though have a chance to edge into the lead when they host the Bath Spa Bulldogs this Sunday. Speaking of the Royals, they climb yet another spot following their most notable win of the year over local rivals, the Gloucestershire Gladiators.

They’ll head to a bye, before taking on the Solent Redhawks in Week Six. Should they continue their red hot form, the Royals could be well on their way to setting up some crucial late-season showdowns against the likes of the Barracuda!

Even though we’ve not heard from them since Week Three, the Gryphons maintain their grip on the top of the rankings by the narrowest of margins.

They’ll have another week of waiting before getting back on the gridiron - hosting Tarannau Aberystwyth in Week Six.