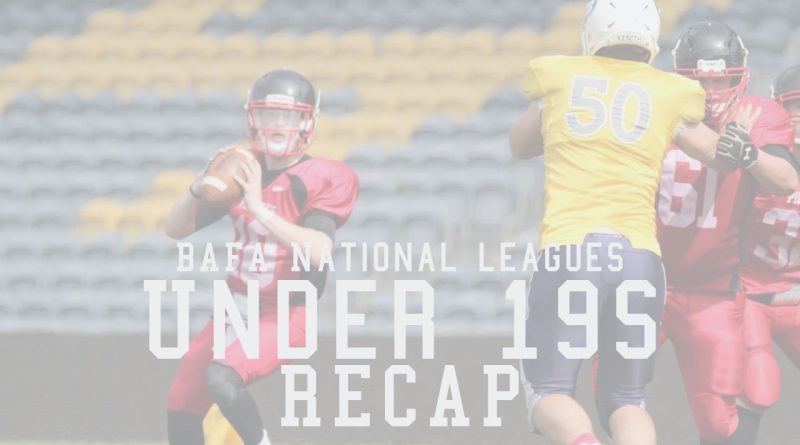 Business, as usual, this weekend, as National leaders maintained their march towards the playoffs.

By Bruin White
The Romans trumped the Caesars for the second time this season, though this time by a smaller margin, coming out eventual 22-6 victors.

Due to a coaching reshuffle following the resignation of their Head Coach, the Caesars had a lot of change to adapt to on Sunday. That being said, they adapted well. Sean Endicott stepped up to the Head Coaching role, while a Nottingham defensive was reinvigorated under new coordinator Ian Rollett.

At the end of the first half, the Romans led by just 6 points to none. Coverage by standout DBs on the Caesars’ side of the ball such as Ben Conley and Luca Melero aided the Nottingham defence to an impressive first-half performance against the same Romans offence who had managed to put 48 points up on them just a few weeks ago. A struggling offence, however, still left the Caesars trailing behind as the two teams kicked off for the third quarter.

Refusing obsoleteness, however, Romans Quarterback Sam White got back into the rhythm of things in the second half: rushing as well as passing with aplomb. Running Backs Brad Armitage and Liam Coxon also nabbed TDs on the day, proving a real depth to this Romans offence.
A pleased Chester HC Will Sargeant congratulated his versatile team, stating that “considering injuries, the players have really bought into what we are doing and have done a great job playing multiple positions at times”.

In addition to the evolving offence, the Romans’ increasingly respectable defence held the Caesars’ O to nil thanks to sacks from Ben Roberts, Jacob White and Samir Patel.
Nottingham’s only score came from a pick-six by Cornerback Melero, whose defensive efforts came to no avail by the end of the game - the scoreboard reading 22-6.

The Caesars were able to move the ball better in this game, in accordance with former Head Coach George Lees’ focus discussed in the preview for this matchup, but stalled all the same once they got in the redzone.

HC Sean Endicott explained that “while we [Nottingham] had plenty of opportunities, we struggled to capitalise”.

This offence can boast a pool of talent recognised nationwide, although they lack a full-time Quarterback. Using wideouts to receive the snap has limited the team as a whole to just 5 points-per-game: an issue they’ll look to resolve as quickly as possible. Now past the possibility of a .500 record as the team had stated they were aiming for, HC Endicott recognises that the Caesars have “a lot to build on for the last two games of the season and forward into next year”.

He continued, discussing the character of current affairs within the wider Ceasars organisation, noting,

“I’d… like to thank the coaches and the club for helping me out this week. As many have heard or read, I became HeadC oach in the middle of this past week and our coordinators, position coaches and admins did a lot to help the day go smoothly”.

The Romans now have a fortnight to prepare for the East Kilbride Pirates as they push for a winning record in their now shortened five-game season. The still winless Caesars, on the other hand, spend a week in preparation to travel to the undefeated Manchester Titans in their penultimate opportunity to get a win in 2018.

The Pirates bounced back from last week’s upset loss to Manchester to tighten their grip on a playoff spot, moving to 4-1 with an impressive 28-18 victory over the Highland Wildcats.

EKP this week were back to winning ways, putting up 28 points against a stout Highland Wildcats’ defence and coming away with an all-important victory. In a match which began very much in Highland’s favour, with a breakaway touchdown on the very first play from scrimmage, East Kilbride bounced back to take the lead and hold it to the finish.

QB Scott McKigen had an impressive showing, hitting Struan Bailey for a pair of Touchdowns, and running in a couple of 2-point-conversions on his own. The East Kilbride running game also left an impression, with Running Backs Rory Hutton and Jack Cochrane both finding the endzone, in addition to a further 60- yard touchdown called back after it was revealed the ball had never been whistled in. The Pirates will take confidence from this victory heading into their final game of the season against the Chester Romans.

The Wildcats now sit at 1-2, but with both losses coming at the hands of Scotland’s football factory, they should not be too disheartened by this. With a walkover against Birmingham likely, and a game against the struggling Nottingham Caesars still to come, Highland remain in prime position to compete for a second successive Northern Trophy, with Britbowl still technically within reach.

The Blitz continue to prove the doubters wrong this week, with yet another dominating performance. The London outfit overcame a spirited Thames Valley Tigers by 54-0 in just two quarters of football, further illustrating their capabilities on both sides of the ball.

The Blitz once again showed their potency on offence, proving that their early season troubles were merely teething problems. With this, their third 50-burger in just five games, the Blitz have accrued an unbelievable 226 points, more than double that of any other team in the South.

The Blitz are not simply an offensive powerhouse, however. In fact, their defence is arguably the stronger of their two units. They have only conceded in one of their matchups this season, conceding a mere 13 points, despite playing such top opposition in Hertfordshire. This game was no different, with the Tigers never really threatening to break their scoring drought.

The Blitz round out their season this coming weekend, when they face off against the Solent Seahawks. The Seahawks have had an up and down season, but possess enough talent to threaten the Blitz, and so the team from London will have to be on the top of their game to round out the perfect regular season.

The Tigers, meanwhile, have finished their season winless. Despite this, the young team deserves immense credit for staying competitive throughout the season, and not forfeiting a single game despite overwhelming odds. They have set a great example for all teams with their tenacity and pride displayed throughout the season, and will look to turn this into results next season.